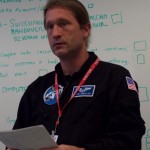 Dr. Jason Reimuller is the Executive Director of Project PoSSUM aeronomy research and education program and also serves as Co-I of the PMC-Turbo experiment and Director of the PoSSUM Bioastronautics Program. In addition, Jason works as a commercial research pilot and flight test engineer with GATS, Inc., is a NAUI SCUBA Divemaster, and is the author of “Spacecraft Egress and Rescue Operations.” Jason served for six years as a system engineer and project manager for NASA’s Constellation Program, leading studies on launch aborts, launch commit criteria, landing conditions, post-landing and emergency crew egress trades, and propulsion options.  Jason also led a NASA and NSF-funded flight research campaign to study noctilucent cloud time evolution, structure, and dynamics in Northern Canada as lead investigator and pilot-in-command. Jason has been a Commissioned Officer of the US Air Force. Jason holds a Ph.D. in Aerospace Engineering Sciences from the University of Colorado in Boulder, an M.S. degree in Physics from San Francisco State University, an M.S. degree in Aviation Systems from the University of Tennessee, an M.S. Degree in Aerospace Engineering from the University of Colorado, and a B.S. degree in Aerospace Engineering from the Florida Institute of Technology.

Dr. Dave Fritts is PoSSUM’s Chief Scientist and has worked in a number of areas of atmospheric dynamics extending from the stable boundary layer (SBL) into the thermosphere, acquiring broad experience with theoretical, modeling, and experimental activities. He has guided a number of experimental programs, including rocket campaigns in Alaska, Norway, Sweden, and Brazil, radar measurements on six continents, and multi-instrument field programs (see Synergistic activities above). He has installed MF or meteor radars at Hawaii, McMurdo, Rothera, Rarotonga, Tierra del Fuego (TdF), and King George Island (KGI), participated in the planning of the ALOMAR LiDAR/radar observatory in northern Norway, and suggested the formation and structure of the NSF-funded Consortium of Resonance and Rayleigh LiDARs (CRRL) within which he serves as PI for the ALOMAR sodium LiDAR. Dave also helped design and was an Interdisciplinary Scientist with the NASA TIMED satellite mission studying the dynamics and energetics of the middle atmosphere. Dave holds a Ph.D. and  an M.S. degree in physics from the University of Illinois and a B.A. in physics from Carleton College.  He has been a professor of physics at the University of Alaska, Fairbanks, and a research professor of electrical and computer engineering at the University of Colorado at Boulder.  He has over 200 publications; listed among top 1/2% of cited researchers by ISIhighlycited.com.  He has served as the Associate Editor for the Journal of the Atmospheric Sciences (1991-2011) and the Journal of Geophysical Research (1994-1997).  He has served as president of the International Commission on the Middle Atmosphere (ICMA) within IAMAS from 1992 to 1996 and as chairman of the Middle Atmosphere Continuous Upward Coupling of Wave Energy (UCWE) commission from 1989 to 1994. 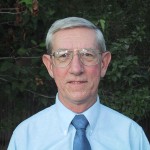 Professor Gary Thomas has been involved in noctilucent cloud research since 1981, when they were detected by the Ultraviolet Spectrometer on the SME spacecraft. Since then he has authored or co‐authored over 80 papers on noctilucent clouds and related subjects, and supervised two graduate students in this area. From 1986 to 2008, he served as Chair of the International Working Group on Noctilucent Clouds (now the Working Group on Layered Phenomena in the Mesopause Region). He served as Chair of the AstroGeophysics Department at the University of Colorado (CU) in 1982‐83; Associate Editor of the Journal of Geophysical Research, September 10, 1992 to December 31, 1995; Secretary of the International Commission on the Meteorology of the Middle Atmosphere, 1987‐1995; and Interim Director of LASP from 1992 to 1994.  He has taught at CU in the areas of meteorology, astronomy, aeronomy, statistical physics, and radiative transfer.  His 1999 textbook on Radiative Transfer in the Atmosphere and Ocean is still in use in graduate classes throughout the world. He is currently a Senior Research Associate at LASP, a Co‐Investigator on the NASA Small Explorer Satellite mission (the Aeronomy Of Ice in the Mesosphere, AIM), and co‐chair of the CAWSES‐II Project 3 PMC/NLC altitude, frequency and brightness changes related to changes in dynamics and chemical composition. Professor Thomas has been a member of the Laboratory for Atmospheric and Space Physics (LASP) since 1967. 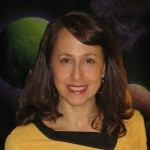 Jancy McPhee has a B.A. in Neurobiology and Behavior from Cornell University and a Ph.D. in Biophysics from Brandeis University.  She was a cellular and molecular neuroscience researcher in academia for 17 years before joining the National Space Biomedical Research Association and later the Universities Space Research Association to manage various aspects of NASA’s domestic and international space life sciences research programs. Since 2010, her goals have been to find motivating and novel ways to enhance space education and science and technology innovation, and to promote global collaboration in human space exploration. She created the international Humans in Space Art Program to encourage people of all ages, cultures and backgrounds to think about and creatively communicate their visions of the future of human space travel through visual, literary, musical, and video art. So far, the Program has engaged 1000’s of artists, and 100,000’s have viewed multi-media artwork displays and performances online, locally on Earth, and in space.  Most recently, she established SciArt Exchange, a nonprofit to expand the Humans in Space Art Program and establish other global science-integrated-with-art activities that inspire the world about space.