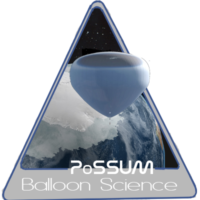 PoSSUM Graduates are doing Noctilucent Cloud Research in the Arctic!

Project PoSSUM Chief Scientist Dr. Dave Fritts and Executive Director Dr. Jason Reimuller were selected as part of a $1.4M NASA-funded experiment to fly PoSSUM camera systems on a high-altitude, unmanned balloon in support of the imagery experiment around the Arctic polar vortex for six days in July 2018. Project PoSSUM works in partnership with GATS, Columbia University, and Integrated Spaceflight Services. PoSSUM Graduates are engaged in the instrument development, operations, and educational outreach efforts in this novel experiment that will study atmospheric dynamics that can only be viewed in exquisite detail through very high resolution imagery techniques.

The images obtained during the campaign will be used to analyze how waves generated at lower altitudes dissipate via instability and turbulence processes. These processes account for the deposition of significant energy and momentum transported by the waves from lower altitudes. They also play key roles in weather and climate throughout the atmosphere, but are poorly understood at present. Imaging of noctilucent clouds provides a unique window on these processes that is not available at any other altitude. Thus, this largely inaccessible region has the potential to educate us about important processes occurring throughout the atmosphere.

In 2017, the team constructed the gondola and the camera, power, communications, control systems, and associated interfacing software. The novel camera system employs an array of seven scientific camera systems configured for sustained operations in the polar stratosphere.  The camera enclosures were constructed by Integrated Spaceflight Services in Boulder, CO and were integrated to the balloon gondola at Columbia University. there, software was integrated and the payload was shipped to NASA’s Columbia Scientific Balloon Facility in Palestine, TX for testing and integration in March 2018.

The PMC Turbo team deployed to Kiruna, Sweden, Antarctica in July 2018 to support launch and recovery operations, a time when the summertime polar vortex is stable allowing for a five-day mission at an altitude up to 38km, capturing about 100TB of high-resolution imagery data over the polar latitudes. Coupled with temperature measurements to be obtained by a lidar payload provided by the German Space Agency (DLR), the team obtained unprecedented insight into the complicated dynamics of our upper atmosphere. On 8 July 2018, PMC Turbo launched successfully and was recovered five days later. 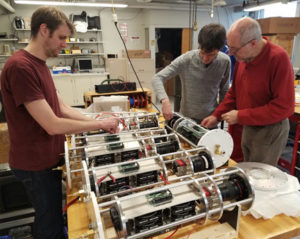 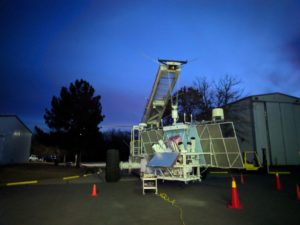 Project PoSSUM members work with the Laboratory for Atmospheric and Space Physics (LASP) to coordinate the PMC-Turbo imagery with the AIM satellite imagery to determine the distribution of energy in the mesosphere, visible by PMC Turbo in small spatial scales, within ‘voids’ and two and five day oscillations observed by the satellite.

PMC-Turbo validated infrared (IR) and visible camera systems in the space environment. Following completion of the PMC-Turbo project, PoSSUM and the PMC-Turbo team plan to extend the balloon imagery obtained in the Arctic with high-resolution tomographic imagery and coordinated in-situ measurements of the upper atmosphere. The cameras flown on PMC-Turbo will be configured as the Wide-Field Imager (WFI) payload, one of a suite of five payloads designed to produce tomographic imagery through a series of suborbital flights as part of the suborbital PoSSUM Noctilucent Cloud Tomography Experiment. Operators of these instruments are being trained at the Embry-Riddle Aeronautical University in Daytona Beach, FL, where candidates learn to effectively operate PoSSUM instrumentation to capture high-resolution tomographic imagery of noctilucent cloud structures through simulated suborbital flight.

Future NLC imagery flights may use citizen-science astronautics on commercial balloons (e.g. the WorldView Voyager) to continue to build high-resolution imagery of small-scale noctilucent cloud structures using the PoSSUMCam System over the period of over four hours per mission.